This house was built in about 1920. It is a one-story Craftsman Bungalow style house that was popular during that time. It was originally located on the Whisenant farm north of the present circle on Allen Drive.

The town of Allen was created in 1872 when the Houston and Texas Central Railroad came through this farming area of Collin County. The railroad made a big impact on the area, because it brought in goods and machinery that the farmers needed to improve their standard of living and allowed shipment of the cotton, grain and livestock raised on the many farms nearby.

By 1920, the railroad was owned by Southern Pacific. Passenger and freight trains made regular stops in Allen. It was a prosperous time for the Allen area. The town had a population of about 550 and growing. Following a destructive fire in 1915, the business section had been rebuilt. It had a group of new brick buildings which housed a variety of businesses important to the growing community. Allen had fine churches of several denominations, a family owned and operated telephone exchange, and some fifty customers receiving electricity from Texas Power & Light Co. A weekly local newspaper, the Allen Messenger, kept people informed of events in the area and beyond. The school had been enlarged to accommodate the growing population of children. The Interurban, an electric rail service, provided transportation for people of the Allen area who wished to travel easily to Dallas, McKinney and other cities nearby to shop and visit with friends and family.

From 1948-1957 the Albert Bolin family lived in this house and farmed on a section of the large Whisenant farm. Albert & Fannie had two girls who grew up in this house. In the 1960’s the house was moved to 303 N. Butler. It was altered over the years by other owners. 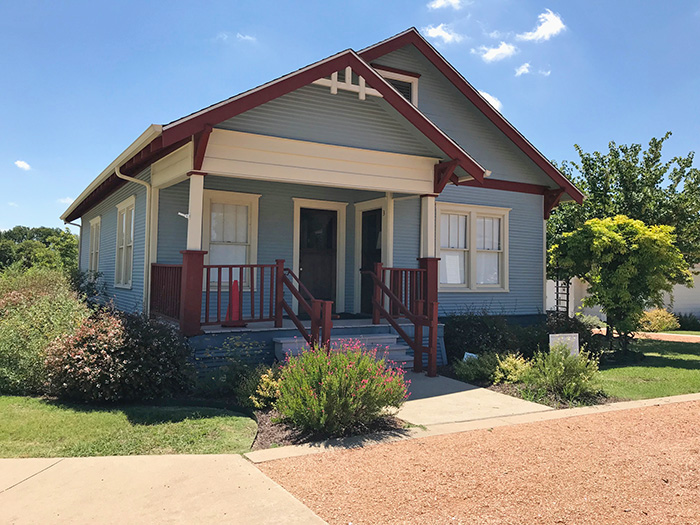 In 2002, the City of Allen and the Allen Heritage Guild chose some houses and other buildings of historical significance to be preserved as part of Allen Heritage Village. A site was chosen and developed for the village. This house, along with the others, was moved to the village site in 2003. As funds became available, an historic preservation architect was hired to plan for the exterior restoration of two houses and the Allen Christian Church. The exterior restoration work on this house was completed in the summer of 2008.